On the Москва Ярославская / Moskva Yaroslavskaya train station we heard:

“путь 3,  Yekaterinburg” which means Track 3, Yekaterinburg. The Trans-Siberian train was there and waiting for passengers. 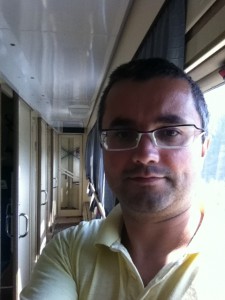 The trip begun and slowly we left the capital. Moscow was now behind us. But the impressions were great. The experience of Moscow was very positive comparing to what we maybe could expect.

Anyway, as I forgot to tell it in the last article, I want to write how great feeling it was to see how cultivated people in Moscow were/are. In those 3-4 times in Metro, we experienced that younger men let our older mother take their seat in order to show her respect both as older person and a woman. Now, immediately, I have to compare it with the all times taking the bus/train in Sweden  in the period of 22 years. During all these years I saw only 5 cases where young persons let an older or pregnant person take their seat.

Let the silence take over now…

When I was little, I loved geography very much. On map of Russia I found a city called Vladimir and I liked it because my best friend at that time was a Vladimir, from my class and my childhood.

Suddenly The train stopped in some city. On the station building I saw a big sign. It was the name of the city: Владимир (Vladimir). 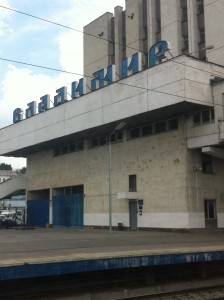 “Was that true? I am in Vladimir now? Wow!  The city from my geography classes! “, I was very excited.

Unfortunately we didn’t stay in Владимир but anyway, “I was there!”.

The trip continued. Very huge and open area. Russia is huge and beautiful. I saw mountaines and rivers. Lakes… The night was close and the sun was going down. “Russia, Ural… we are leaving Europe, the continent”, I was thinking while we came closer to the Asian part of that beautiful country.

Around 15.00 Moscow time we came to Yekaterinburg. It was very sunny and hot weather. We tried to find a taxi to the hotel and after a shorter search we found one. He took us to the hotel where we seatled down for a day. 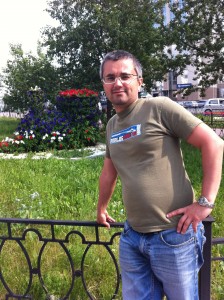 We took a walk to look around the city. Close the are of hotel there is a nice big park. People could walk or do some sports there and it was simply relaxing to take the walk there after a long train trip.

In the part we found a statue as a memory of the soldiers on the Ural mountain in the period of 1941-1945. 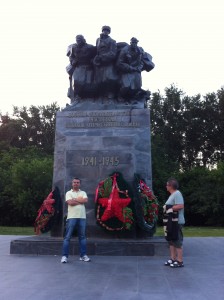 Yekaterinburg has maybe between 1,5 and 2  million inhabitants according to the taxi driver and it is the main industrial and cultural center of the Ural Federal District.

Little more facts and info about history and the famous Tsar family you can find at Wikipedia.

Trams in Yekaterinburg reminded me on trams in Sarajevo, the city where I come from. In some moments I had some feeling like the city is a mix of Sarajevo and Prague at the same time as the business part of the city gave some impression of being in Frankfurt am Main or Minneapolis downtown. 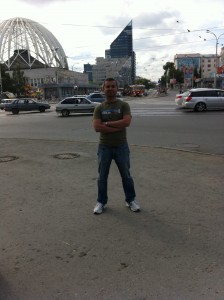 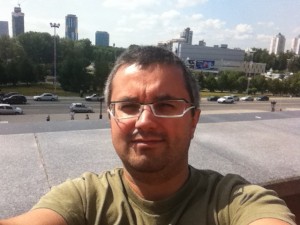 The next day we took some longer walk from the hotel to the central station and in the afternoon the trip continued toward Irkutsk, The city on the Baikal lake.