Early morning that day we arrived to Irkutsk. We took a taxi to the Marriott hotel at Улица Чкалова on the other side of the river Angara. The bridge was like all similiar bridges in Prag, Budapest, Belgrade, Vienna and other big river bridges. 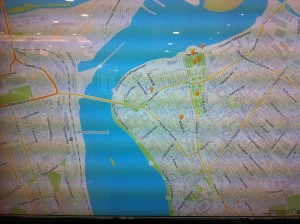 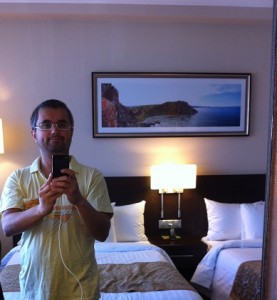 In the hotel we decided to sleep some hours before the next adventure.

Our tourist guide and her driver picked us up outside of the hotel and we were on the way to the lake Baikal. It was a wonderful summer day and everything around us was green and nice. The trip was not so short to the lake and the forest between the city and the lake reminded me on the nature in Alaska. I have never been in Alaska but I have seen it many times on the TV. Anyway, the river Angara looked so green/light blue on our right side. It was simply amazing nature!

The car stopped at the place where the river starts its journey from the lake Baikal. The tourist guide showed us a big rock in the middle of the river and she told us a story about it. You can read it in the bottom of this article. 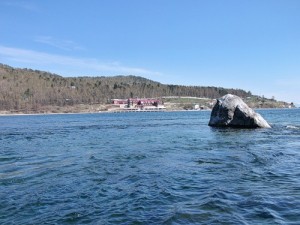 As the legend says, people who visit the lake Baikal do not come “for the visit”, they simply come “home”. This legend claims also that all people are born in the lake Baikal from the beginning and that is why they are “back home” when they come for a visit. The lake also cleans the soul and makes your life some years longer if you swim in it, the legend says, but I did not dare to do it. It was too cold! My mother and my brother did it, they were braver and they will of course have a long and happy life. Next time it will be my turn! 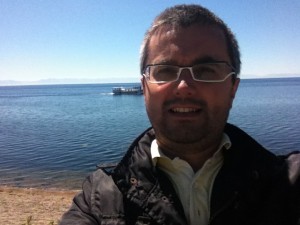 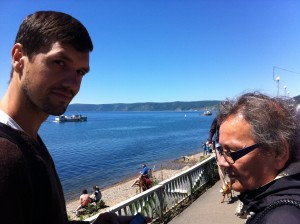 The coust of lake Baikal

The guides took us to the local market in the village on the coust of that lake. The local inhabitants were selling all kind of souvenirs, russian bacon and fish from the lake.

We saw a local little church too- it was built of the woods.

As I mentioned Alaska before, the houses in this village together with the lake and the forest reminded on the environment in Alaska. 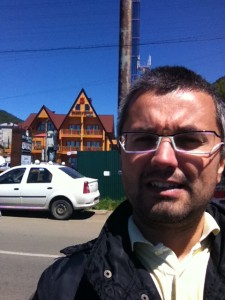 We also visited the museum outside of that village. There we could see many details about the lake Baikal, its history, its water life under the surface and of course the life outside of it.

It was worth to come “back home”!

The legend about Daughter of Baikal  (from: http://www.baikalpharm.ru/eng/legend/)

Long time ago mighty Baikal used to be cheerful and kind. He loved his one and only Daughter Angara. She was the most beautiful daughter in the world. She was lighter than

morning sky and darker than the darkest cloud at night. Everyone admired Angara, even birds and animals.

Father Baikal nourished and protected his daughter with love. One day, when Father Baikal has fallen asleep, Angara run away to her young man — Yenisey. Father woke up with

enormous tide of anger. Furious storm has risen, mountains have begun to sob, forest has fallen, sky has turned black in grief; animals in fear run away, fish swam to the

deepest depths, birds flew to the Sun. Only wind howled and ocean raged. Mighty Baikal has struck the grey-haired mountain and broke off a big rock from it and threw it after

running daughter. The rock hit the daughter; she stumbled and fell.
And blue-eyed Angara started to cry and beg her Father:
— I am parched with thirst, forgive me. I am asking for just one drop of water, please.

Father Baikal shouted with anger:
— You will get only my tears!

And thousands of years Angara flowing into Yenisei brining her clear as tear waters. And grey-haired lonely Father Baikal became gloomy and dreadful. The rock thrown by

Baikal after the daughter people call «Shamanskiy stone». It is now the sacred place where people bring their endowments to Lake Baikal. People say: «when old Father Baikal

becomes angry, he will break apart Shamanskiy stone and water will flood the Earth».