The end of this World Cup in Brazil is close! Yesterday it was the second semi final game on the TV. The first 45 minutes were without goals. Robben, the famous dutch player who likes falling down just for getting a penalty kick was very careful this time.

He did not show any tendency of falling down. On the other side, Argentina’s player Mascherano got wounded in the head and he just fall down because of feeling dizzy.

Argentina’s Messi was neither so very popular. He had an opportunity to make a goal with his free kick but the dutch goal keeper could read his thoughts and he protected the goal very well. 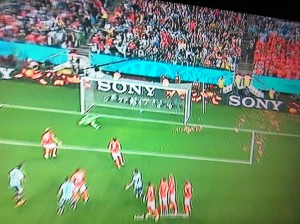 However this first half time has had no similarities with the match between Brazil and Germany where Germany won with 7-1.

During the second half time we could e.g. see Argentina’s player Demicheli’s yellow card because he pulled down Robben. The passivity simply continued.

Argentina won with 4-2 at the end, after a very long fight without goals. The penalties solved the problem.