What we did in Beijing

We tried to see and visit as much as possible. We went to a pharmacy where we bougth some special tea and heard some medical doctors, specialists in the Traditional Chinese medicine. We went to a typical local restaurant and we visited a factory of the original Chinese tea. We also visited a huge jewelry store.

In the central city of Beijing we found a food festival place where it was possible to see and eat all different kind of e.g. sea food, fishes and insects. Chinese Yanjing beer tasted also very well. We found a big toy store where we also bought some cool toys. 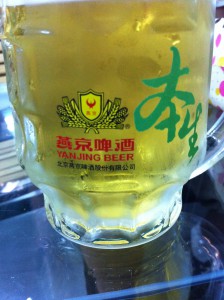 Besides the Forbidden city we visited another places with big park and temples.

Vi visited a huge lake inside the central part of Beijing and there we took a boat to another side of the Lake and back. On that other side we walked in a very very long passage. It must have been up to 2 kilometers long, I do not remember the exact length but it looked endless from the  inside.

And in some moments we were little bit tired… 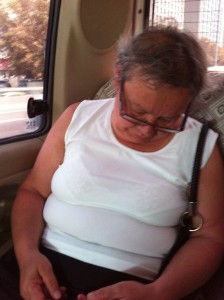 We also had a private city tour by the bus. The bus trip was very cheap. Only 1 Chinese yuan for a trip inside the city.

In another one restaurant we ordered some food, similar to that we ate in the hotel, but it was not so very similar. In the menu it looked similar but it was not. We gave up and took a walk around and found a huge screen above us. It was hanging between some high buildings. We also took a very long walk in the night in  the city .

Of course we visited the Chinese Great Wall too. We took a ropeway up the Wall. A man from our tourist group (from Philipines) said that he first time, many years ago, had to fly with the chopter up to the wall because they did not finished the ropeway.

On the Great wall the weather was not so very nice. It was cold and cloudy. Anyway, there were many people. We found also a very interesting insect there, a centipede.

The flight back to Copenhagen

And sadly, this wonderful was over. That heavy word “over” sounded very sad. We took taxi to the airport. It was of course also gigantic, as many other things in Beijing. We had to take train from the check-in to the gates and it was something like they have in Chicago on the O’Hare airport. The pictures below show the area of Russia. Somewhere on the way to Omsk – the city we passed through with the train – that was a very nostalgic moment!

So, Beijing and China… you are great and you gave me, you gave us something wonderful. We discovered that our little Europe is simply very little. USA looks also very little comparing to the big China. Russia and China, together with Mongolia opened some new doors and created some new points ow view.

If you, reader, ever experience this trip you should be able to understand what exactly I mean.

Communicating live with the Russian people in Moscow and Yekaterinburg, with a man from Omsk, with a kid Daniel at the train, with two newcomers in Novosibirsk, a Russian woman from Berlin (in german), with the Nomad family in Mongolia, with the Chinese salesmen like many other people we met including our tourist guides is something which together with the complete trip including all experiences is worth the 110.000 SEK we payed for this 18 days long adventure.

Our loved Mother, thank you once again. You gave us something special. It is not possible to describe with the words how rich I, as the writer of all these 10 articles, feel now.