The Serbian army prepared against the this evil enemy. They bombed one of the bridges over the Danube river so they could stop the enemy’s trains to come in to the capital, Belgrade and around that place the first shootings begun.

Some people claim that Serbia started the first world war because Gavrilo Princip, a Bosnian Serb, killed Franz Ferdinand, the Archduke of Austria-Este, Austro-Hungarian and Royal Prince of Hungary and of Bohemia. 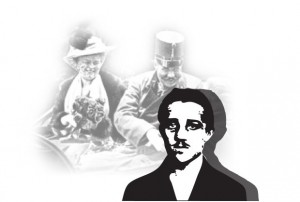 Yes Gavrilo killed him but not in Vienna – he killed him – the enemy, the occupator of his own country Bosnia and Herzegovina, in the capital Sarajevo.

So, the Austro-Hungarian Empire behaved wrong 100 years ago, they actually were a bad guy who wanted to occupy as much as possible.

We really hope that these two small countries never ever will begin a new war. It would be just a new big shame for their nations.